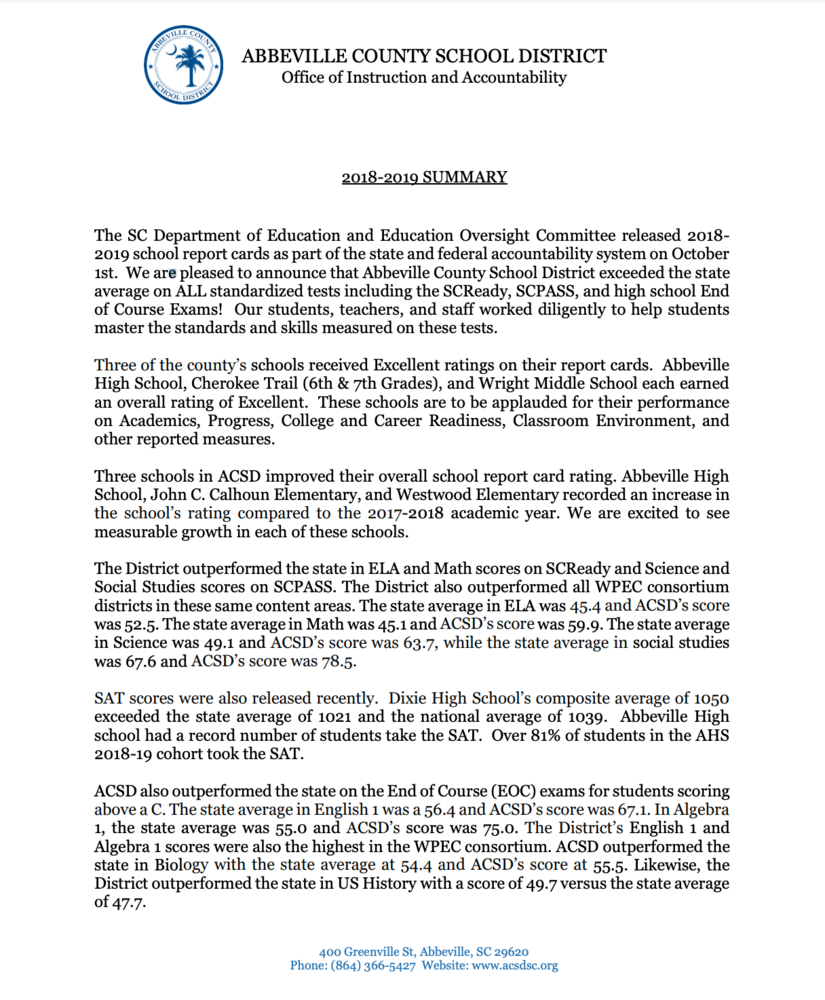 ACSD Exceeds in All Standardized Tests

The SC Department of Education and Education Oversight Committee released 2018-
2019 school report cards as part of the state and federal accountability system on October
1st. We are pleased to announce that Abbeville County School District exceeded the state
average on ALL standardized tests including the SCReady, SCPASS, and high school End
of Course Exams! Our students, teachers, and staff worked diligently to help students
master the standards and skills measured on these tests.

Three of the county’s schools received Excellent ratings on their report cards. Abbeville
High School, Cherokee Trail (6th & 7th Grades), and Wright Middle School each earned
an overall rating of Excellent. These schools are to be applauded for their performance
on Academics, Progress, College and Career Readiness, Classroom Environment, and
other reported measures.

Three schools in ACSD improved their overall school report card rating. Abbeville High
School, John C. Calhoun Elementary, and Westwood Elementary recorded an increase in
the school’s rating compared to the 2017-2018 academic year. We are excited to see
measurable growth in each of these schools.

SAT scores were also released recently. Dixie High School’s composite average of 1050
exceeded the state average of 1021 and the national average of 1039. Abbeville High
school had a record number of students take the SAT. Over 81% of students in the AHS
2018-19 cohort took the SAT.

Abbeville County School District is extremely proud to see the work of students and staff acknowledged by these reports. We are committed to the continued success of ourstudents and remain steadfast in “putting students first.”